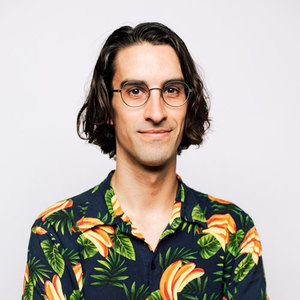 Hi! I'm an improviser and sketch writer/performer in Portland. I began my sketch and long-form improv training at the UCB New York starting in 2012. I moved back to Portland in 2015 and have been almost exclusively performing at Kickstand Comedy. I've since performed with the groups So Many Mike, Juice Face, and King Ricky. I currently perform with Kickstand's house CVLT team "Hot Goss" and Velodrome anchor team "Papa?" I'm the host of the monthly bit show "They Came From The Bins!" and I perform somewhat regularly with MONDO and Twist & Shout. For sketch, I've written and performed 3 shows with the sketch team Night Bus (formerly Big Mother), and was the head writer, sometimes director, and always performer for Show Ridiculous. I'm currently coaching one of Kickstand's student teams.

In my improv coaching I'm all about working those fundamentals where needed, while pushing you to take risks and find what's interesting to you. I'm also available for coaching your sketch team for both writing and performance. Let's make some comedy!

Note: my schedule is changing week by week, please message to check availability and we can work something out.