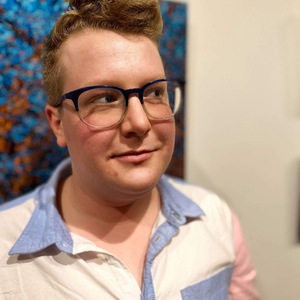 Roland began studying long form improv at the Upright Citizens Brigade in New York in 2013 while also studying serious acting at NYU’s Tisch School of the Arts. After getting his BFA, Roland performed on several indie teams and completed the advanced study program at UCB. Once he moved to Portland in 2015, Roland began taking classes and performing at the Brody theater, the Liberators training center, and the Ape theater. He has found his home at Kickstand comedy, and is currently on a house team there. He teaches level 1 and level 4 (Harolds) at Kickstand. Roland performs regularly with his teams Queer Ye Queer Ye, Cut and Run, the Kickstand CVLT, and Dear Diary. He also coaches one of the student teams at Kickstand. As a coach, Roland is all about maintaining authenticity while still having fun. He wants to see what makes you unique as a performer and help you to become more confident in your skills. Roland identifies as queer and is extremely interested in coaching other LGBTQIA+ improvisers and helping them find their place within the community! My schedule varies weekly, contact me to work something out.